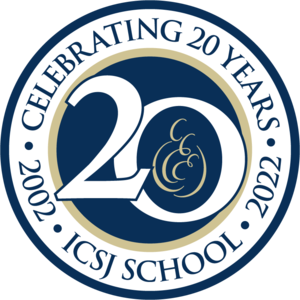 This fall marks the 20th Anniversary of the re-opening of Immaculate Conception-St. Joseph School. We are proud of our growth to date and are excited to see what the future holds!

Immaculate Conception and St. Joseph Churches are two of the oldest parishes in Chicago; opening their doors in 1859 and 1846, respectively. Each church has a rich history of education and operated schools for neighborhood youth for over one hundred years. Changing neighborhood conditions forced both schools to close in the 1980s due to low enrollment.

By the mid-1990s, the Old Town neighborhood saw a rise in families with young children and the demand for a strong Catholic school option in the area swelled. Answering this call, Immaculate Conception's then pastor, Father Pat Lee, collaborated with Principal Katie Sullivan to re-establish Immaculate Conception School.

On a beautiful fall day in September 2002, the first 17 PreK and Kindergarten students entered the doors of the new Immaculate Conception School. Each year, a grade was added to create a school serving students from PreK3 through eighth grade. During the first nine years of operation, three major construction projects were completed. Additions in 2003 and 2008 at the North Park Campus (Immaculate Conception building) allowed for dedicated space for the early childhood program and specials classes (Art, Music & Physical Education). With enrollment continuing to grow, the second phase of expansion was completed with the opening of a second campus across the street from St. Joseph Church, ICSJ's Hill Street Campus. The North Park Campus is the home to our PreK3 through third-grade students while the Hill Street Campus serves our fourth through eighth-grade learners.

This fall, we celebrate the 20th anniversary of our school's opening in 2002. We are now proud to educate over 330 students across our two campuses. Our nearly 350 alumni have matriculated to the most competitive high schools in Chicago and the most prestigious universities in the US and abroad. Amidst the tremendous growth, ICSJ has always remained true to its roots of offering a "Small School Feel in a Great Big City." We were honored to have former key members of our school and Archdiocese leadership teams as well as some of our pioneer parents and families together to reflect on our early history. Former Co-Principal Maria Hill, former Superintendent of Schools for the Archdiocese of Chicago, Sister Mary Paul McCaughey, former ICSJ Religious Education Director, Alice Doering, and current and alumni parents were on hand to mark this joyous occasion.

20 years ago, the concept of Immaculate Conception-St. Joseph School started as a tiny mustard seed. We are amazed and proud to see how that seed has grown into a vibrant and thriving school community. We are grateful to all members of the ICSJ community who had the vision and leadership to turn the dream of creating a premier Catholic school a reality.